It was with such great sadness that we had to change our plans and head home to Saskatchewan. Don's dad has suffered for several years after his stroke with declining health. This last week or two we have been in constant contact with Mom and Don's sisters. Sadly on the morning of September 16 Dad passed away. We packed up quickly and hit the road. In a perfect world it would have been nice to make the trip in a day, but we made it to Ceylon Regional Park. When we knew approximately where we were going to stop for the night I used the Campendium app and found this one. I called to see if they were open and what process we should follow for a late night arrival. The manager was so amazing, he said if we were only stopping to sleep to just pull in the parking lot and stay there. No charge, nothing. People are wonderful aren't they?

We made it to Tisdale on Monday by noon, and were relieved to be with Don's family as they planned the funeral and we were able to help with the many challenges of this time on life.

Another great help on this  trip was the owner of an office complex behind Don's sister's house in Tisdale. For the second time she allowed us to park in the lot and plug in.

Although it was a sad event that brought us all together, we were blessed that we could be there and to see the multitude of family and friends we did. Thank you to everyone for their support. 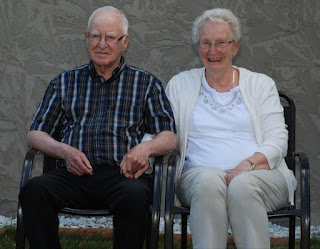 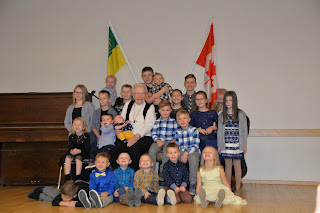 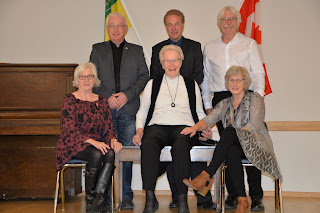 Arthur Herbert Smith was born on May 17, 1927 in Ninette, MB. Art grew up on a farm one mile north of Eldersley where they farmed four quarters of land. During the winter of 1950 Art met Margaret. At the time Margaret was the school teacher in Eldersley.

Arthur Smith and Margaret Campbell were married on July 4, 1951, in the Anglican Church at Meskanaw. After their honeymoon, Art and Marg went to Bjork Lake and worked together, breaking the land and picking roots. Art and Marg lived in two granaries while their house was being built. On January 23, 1953 Art and Marg’s first son was born, Kenneth Arthur. Ken was born in Tisdale and at this time Art returned home and the new family of three moved into their farm house. Over the years the family increased, two daughters were the next to arrive, Kathleen Margaret born on March 22, 1954 and Karen Louise born on July 15, 1955. After the two girls, two more boys arrived, Donald Wayne on October 24, 1956 and Terry Allen on May 19, 1960. With a family of this size, there was never a spare moment! Art and Marg kept busy with the children’s activities and community affairs. Art especially was very active in the community. He served on several boards and committees and spent many, many hours helping with flooding rinks, preparing sports grounds and other community projects. In 1972 Art and Marg rented their farmland. Art spent that summer working for Tisdale Alfalfa Dehy Plant. In December 1972 the family moved to Tisdale to live. After the move to Tisdale, Art had many different jobs over the years. He worked at Lamb Hardware for a few years then went into the freight business with Ken. After they sold this Art started to work at Prairie Gas with propane. He worked there for many years and at one point the name was changed to Superior Propane. Art retired from Superior Propane in the spring of 1988.

Arthur was predeceased by his parents Jim and Louisa, sisters Florence, Ruby and Mary, and brothers Jim and Seymour. He is survived by his wife Margaret, his five children, thirteen grandchildren and twenty-four great grandchildren, and brother Fred.