We had a first this month – Thanksgiving at the Stecyk cabin. We even styed in the trailer and cooked a turkey too!

Then we filled our month with our favorite sport – rink hopping. This takes endurance and map planning – what time to leave, which route to take, where to eat and when! Fabulous!!

And then the highlight of October was Don’s 65th Birthday. We rented a small room at the Something Else restaurant and found a day where EVERYONE cold attend, between ice times.

Posted by Don and Donna at 6:12 PM No comments:

I think I am getting tired of saying and then we…

Well first an amazing long weekend at the Stecyk cabin

Then an epic camping trip through Alberta and Saskatchewan…

Cypress Hills Park, Writing on Stone, and the great town of One Fuur (look it up) 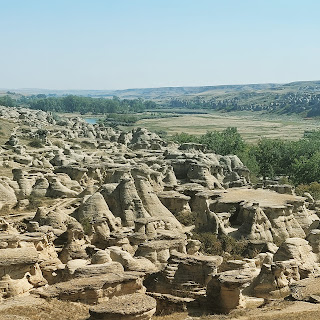 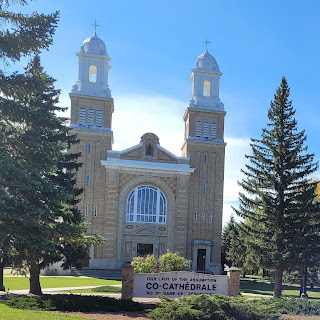 Saskatchewan Crossing to camp with Roxanne and Lee, joined by Larry and Ivan

Wings at White Bear – worth a mention!

An overnighter at Uncle Michael and Aunt Doreen’s

Manitou Lake and a stop at  Ken and Brenda’s

Farewell September, I am off to sleep!

Posted by Don and Donna at 6:10 PM No comments:

Well I think we did it all in July this year!

But not to be outdone, August came in hard.

We just stayed home and were lazy on the long weekend. Unless you planned far ahead for a campsite you are typically out of luck.

I love music of any kind and outdoor concerts too. All summer I had intentions of going to Heritage Park in Stony Plain and taking in at least one of their events, and I finally made it. Emerson was with us for a sleep over and she almost willingly came with me. LOL Actually she was in favor and it was great event. We were fortunate to hear Bobby Wills. If the name is not familiar he is a country singer and my favorite song is Never Didn’t Love You.

We promised ourselves we would spend some of this Covid and can’t travel out of Canada time making an effort to see friends. So on Friday we headed to Suffern Lake Regional Park in Saskatchewan to visit Amanda and Rob at their cabin. My photos include a bag of wine and a charcuterie tray. so it’s not hard to decide what we did that night! We had a ton of laughs, met some of Rob’s crazy but lovey family, and headed out after breakfast t see my sister at her trailer, at another regional park called Glenburn. Saskatchewan has so many of these Regional Parks, some pretty small, but most just wonderful. They are more likely to have seasonal lots than we do in Alberta, which has it’s pros and cons I assume.

It was so great to visit Ginger and Ben and Alyssa, then we were surprised and so happy to see Leigha nd Aaron and their kids too! And my surprise guest was brother Terry! I had not seen Terry since mom’s memorial (he is her stepson, my half brother). That warrants a photo.

Next on our Saskatchewan tour was a stop at Pike Lake Provincial Park where we were meeting up with Larry. We had a blast! And part way through Kathy came to stay with us. We visited the Berry Barn, went on a distillery tour, tried to track down a couple of wineries, and Kathy and I went to Saskatoon and had supper with Ginger.

We also had an afternoon visit with Bree, and old friend from Tisdale days, and Greg, another old Tisdale bud.

It seemed like a pretty packed time, but when we realized we would almost be driving right past Walter and Pat who now live in Hanna, it was an easy choice to spend one more day and visit them! They treated us to dinner at the Hanna Inn, and we visited until it was late bedtime.

We were glad to be home for a few days, because at the end of the month we headed out to Abraham Lake again so I could attend a meeting at the Goldeye camp as part of my FCL duties. We extended that stay and took a day to visit Banff, as last time we tried that it was raining and crowded.

And that was an exhausting but glorious August!

Posted by Don and Donna at 6:08 PM No comments:

So as July approached we have another tradition that started a few years ago – meeting Jim and Janice as soon as Janice is done school for the summer. As large cattle farmers this is the one time of the year Jim can manage to get away, and it’s been so great to make a time where we can get together.

We decided to meet in Pincher Creek and then explore the area around – Waterton specifically. And maybe Fernie :)

It was BLAZING hot there. We could barely do anything in the heat and the AC in our trailers JUST kept up. We visited Surveyor’s Lake where there are TONS of turtles in the water, took a cruise to the US border, and just enjoyed each others company.

But we made lots of time for visiting, refreshments, food and friendship!

Lindsay and I had discussed trying to do Edmonton attractions this summer, so we fit in a day with the kids there too!

In the middle of July we met Ivan at Abraham. As you can see from my photo it was a lot of work!

Lindsay and Jeremy and the boys joined us, tenting no less! We did the Siffleur Falls trail. That’s always a great hike. Mason and Connor had a great time. Connor is working up to a long overnight hike with Jeremy, so this was a great practice run. They seemed to have more energy than us. LOL

Since we seemed on a roll this month, Lindsay and I also took the kids to the Royal Alberta Museum and Taste of Edmonton. What a blast, what a hot day, what good food and what a tired Grandma!

Then the next day the girls and I went again for an adult evening.

July finished off with a fantastic camping boating trip with the Cameron kids! We pulled up to Minnie Lake by Bonnyville. What a great time. We boated, visited Bonnyville for Mr Mikes dinner, saw Clifford and Cheryl, Jim and Janice, and had so much fun. Beach volleyball, Bean Bag Toss, tubing and Grandpa’s best moment – the kids all went skiing!

Posted by Don and Donna at 3:22 PM No comments:

I am throwing June July and August together. We had such a fantastic summer. Some Covid regulations were lifted, some came back, etc. but when you can get out in the sunshine and outdoor gathering limits fit your family and friends you can’t ask for more.

First things first we had to get the boat in for it’s inaugural soak. Picked a beautiful day for that. 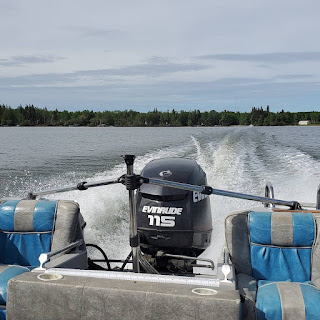 Lindsay and I visited the zoo with the animals haha

Don and I headed north to Calling Lake for what has become our annual Walleye Fishing Extravaganza with the Blue’s! For one week it’s a competition to see who can eat, drink and fish the most. And of course consume my amazing fried fish…

We also headed back to Kathy’s cabin this month. We had a specific purpose and that was to see mom’s bench that was installed. I’m not sure I have told you about the bench? There is a trail being built around the lake that mom and dad had their cabin at ( Kathy now owns the cabin). Anyway they put out the idea to purchase memorial benches. Mom said how she would love one for her and dad, so some of her family; Don, sister Kathy and brother Terry and all their kids went together and bought one.

Of course this was the month of Father’s Day as well and we had a fantastic yard vist with all!

So without all the details of visits with the kids and friends that’s June!

Posted by Don and Donna at 6:06 PM No comments:

We had an active month but for some reason I don’t feel like adding a lot of dialogue to that so here is a summary:

May starts off with Blake’s birthday! He turned 14 this year and achieved his learner’s license! Way to go Blake!

The kids were online learning AGAIN. It seems this will never end in school, out of school – it's a yoyo, or maybe a boomerang. LOL Anyhow I decided it would be fun to start a hot lunch program like they have in schools, so I created an order form and each family had a hot lunch day.

I had a lovely Mother’s Day as well!

The May long weekend saw us heading to the Stecyk cabin for our annual adventures. Fresh air does your soul good, as well as spending time with our kids which has been so cut back this year. Lots of laughs, great food and drink and quadding.

By May 25 Don and I were FULLY vaccinated. We are so happy to have reached that goal.

And to end the month we celebrated our 41st Anniversary.

Posted by Don and Donna at 6:04 PM No comments: