Sometimes it’s hard when things don’t go as planned. I would tell you I’m pretty flexible but when I have my head and heart ready for something then it is not as easy. And yes I know weather is not predictable. Let’s go back a bit.
We usually leave for the south after my annual Co-op Conference and AGM is Saskatoon. That means typically that we leave by March 1. This year I had no work commitments past February 16 and the Co-op event was March 2. I had the brilliant idea of leaving early and since we fly to the conference anyways, flying form somewhere yonder rather than home. That would allow us an early departure of February 17. I saw this as almost a gift to Don, who I know would like to be away even longer, and a chance for me to start breaking myself away from home sooner. This year we will be on the road for 10 weeks!
All this drama is not leading up to anything serious, just a snowstorm both at home and farther south, that prevented us from leaving for 2 days. Don followed the roads and weather into Montana closely and things were a mess with snowfall, wind and warnings. So we departed home at about 5:30 a.m. February 19.
It was a nasty drive all the way to Dillon Montana where we stopped for the night. Our goal is always to make it to Idaho Falls. We have never taken a hotel room before as the temperature was always around –5, but this time we couldn’t do it. Look at the temperature!!  Yikes. We had a great room though, and we thrilled that they offered a soup and bun buffet. Odd but welcome!
Excuse the odd photos from my phone . 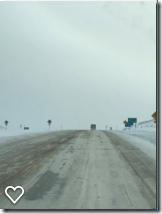 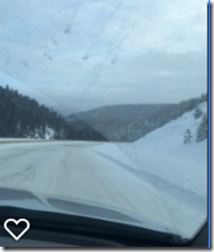 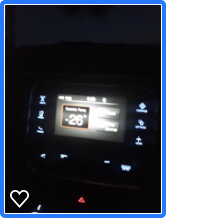 The next day we set out with determination and expectations. Some not met. Don took every challenge the roads and weather provided, and after the 2 – 3 hour delays the day before, we were still at our destination of Sand Hollow Park in St George Utah by 6:00 p.m.
It was my birthday and we were going to go for a nice dinner, but honestly we didn’t have the energy to do anything. We loaded up on groceries and selected some take a way from the deli and that was it.
The weather was nasty and windy, although no snow. We appreciated the full hookups as we de-winterized the trailer, ran the fireplace almost non stop and filled the pantry.
After 3 nights it was time to make a break and try yo get back into our regular pattern! We knew Ivan was in the area, which for RV’ers might not be as close as readers think, and agreed to meet at Stewart’s Point. Ivan introduced us to this boondocker’s delight and it has become a favorite of ours.
After getting the rig washed in St. George we were off. Still not shorts weather but I am sure we’re getting there, right?
Posted by Don and Donna at 12:47 PM