Don and I have been going somewhere in September for years now. When we worked traditional jobs it was sometimes difficult, but as we began our own companies, etc. we became better at going away and or working away.

This year we had to work it around my Co-op Board role. So we went to BC for 3 weeks, came home and unpacked the trailer, packed our suitcases, and headed to Saskatchewan. Don dropped me at the hotel in Saskatoon and went on to Tisdale to visit family.

I just love the southern part of our province and the windmills, and after a summer of driving the boat around as we camped, I was happy to be a passenger again. 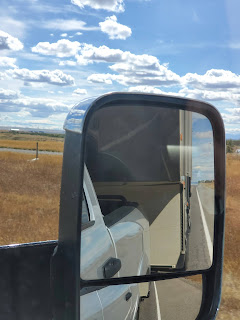 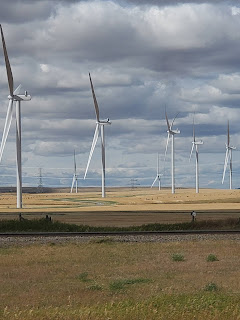 This year we decided to go to the Cranbrook area again, but to find a new boondocking spot. Again we lucked out.  As is our habit when scouting new boondocking sites, we spent one night at Kikomun Creek Provincial Park so we could unhook and find a spot.
Our first site for a week was Wapiti Lake Recreation Site. The first 2 nights we had this giant space to ourselves, but there was no surprise as the weekend approached that company arrived. No problem though as they were a long way from us, and 2 great couples that we are still in touch with. We spent our days exploring, and drove to Fernie to have lunch with the Paskos. 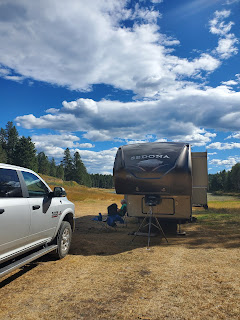 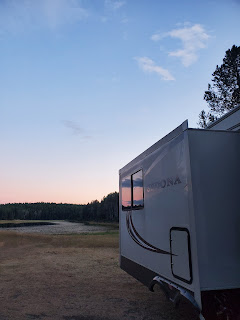 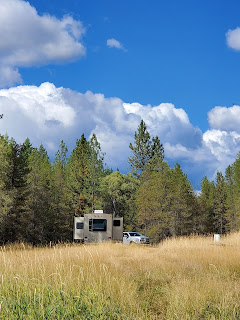 One of the most mesmerizing sites was at Surveyor's Lake, where you can view literally 1000's of Painted Turtles in the water. I have never saw turtles in this environment. 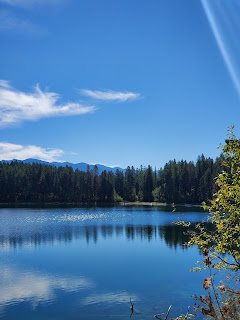 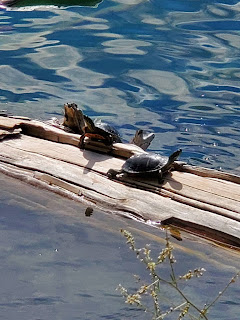 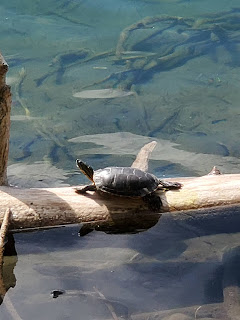 We found falls to explore as well. The first ones were Marysville Falls. The falls are right in town and just beautiful. And there was an ice cream shop at the end! 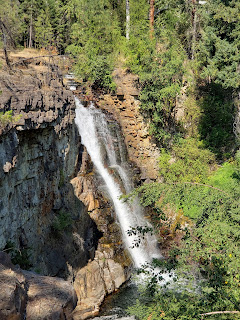 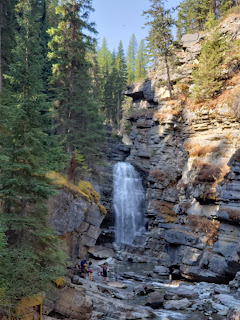 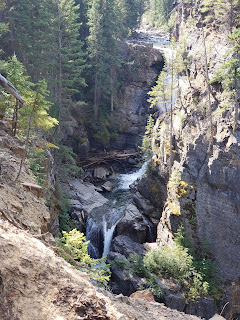 Our next destination was a site at Goat River Canyon near Creston. Yet another idyllic spot on the river. There were even some trails to walk and explore. This was a forestry road so there was traffic in the daytime, but nothing disruptive. 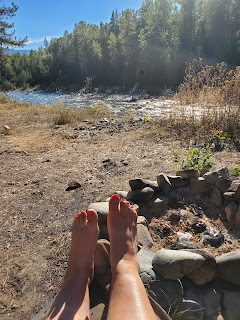 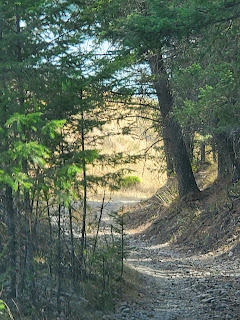 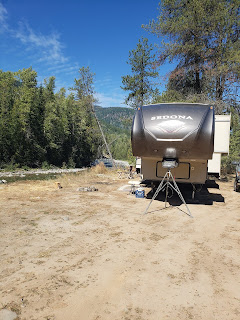 We did a lot of exploring on this trip as well. We actually drove to Trail to see my niece Jenny and her boys, and while there her and I had lunch while Don and Ivan went to explore. Oh I forgot to mention Ivan joined us here for a few days.

We weren't really sure when we were leaving or where we were going, but the weather or actually the smoke from the forest fires made the decision easier. We headed to Cranbrook and at the end of the day actually found ourselves back at Abraham Lake.

It was at bit busier than earlier in the season, but just a hint of smoke. We relaxed there for a few days, then headed home.

I had a commitment to work at a golf tournament, then we were headed to Saskatchewan.

This gave us a chance to do some yard work and laundry before heading out.

By the time we got home September was nearing an end.

It was a great month with more memories. Don had a wonderful visit with his mom and family and I made it through my first set of in person Board meetings!