Well I must say the Smiths took Vegas by storm  LOL Not really but we did have a great time, albeit we stayed in a full service crowded RV park. That was quite the adjustment after the solitude of The Pads.
Two things were to take place in Vegas – we were meeting up with Ken and Brenda for some travels together, and also for the weekend Clifford and Cheryl were in town.
We were booked in at Sam’s Town KOA for 3 nights, and when we phoned to confirm our site and see if they could try to have Ken and Brenda somewhat close to us, we were told they had a special where you stay for 3 nights, get the 4th free. I had visions of laundry so that sounded like a good plan, hence we arrived on Thursday. Too bad for the laundry, visions of Fremont Street took over, and we went there for the evening.
The next day back on schedule doing laundry, then awaiting Ken and Brenda’s arrival. We visited a bit, went to Costco, then walked across to the casino for dinner.
Clifford and Cheryl arrived in town about 9:30 and we picked them up at the airport. The fun thing about that was Clifford didn’t know we were joining them for the weekend, and the surprise was worth it! Cheryl had this in the works since January and I think she was glad to no longer have to hide the plans. We had purchased Reba and Brooks & Dunn tickets months ago, and Clifford kept wanting to buy them. Anyhow, we drove them to their hotel, stopped for a night cap, and made plans for the next day.
On Saturday Brenda and I got up early and took a transit bus to the outlet mall. Although we didn’t seem to shop hard and strong, it was still noon before we were ready to call our ride. Back to the trailers to change then downtown to meet Clifford and Cheryl. We met for an early dinner then off to Caesar's Palace for the big show. It was a fantastic concert. Two and a half straight hours of singing, no washroom breaks.  Haha And because we had not had quite enough fun – off to Fremont Street again. Since it was St Patrick’s Day of course there were some low key shenanigans.
Today was a quieter day. We did join the other Smiths for an early dinner, then back to the trailers for a quiet evening.
Tomorrow we are up and at it on the road to a state park in New Mexico called Rock Hound. We weren’t able to make reservations so fingers crossed!
Take care 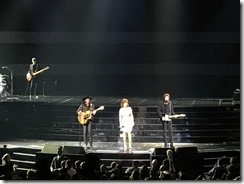