We were looking for somewhere different but kind of in the same area, meaning within an hour or two of Las Vegas but somewhere we haven’t explored. Don suggested Death Valley and after checking some other traveler's blogs and posts and Campendium for a place to park, I agreed. Actually it would take a lot for me to disagree with Don’s choices. He, on the other hand, has numerous reasons to question my choices. Actually it is not my choice but rather the time of year that I am usually off with. For example I really wanted to visit Sun Valley, Idaho. Don’t do it in the fall.  LOL

Anyhow, back to this story.

Both Don and I had read about a boondocking place called The Pads, just on the south park border, nestled against the Funeral Mountains. We parked the trailer for one night at Tecopa Hot Springs Campground and used the opportunity to scout some areas. We knew we found a winner with The Pads. Access to the park was within miles, access to the camping area was within feet of pavement, etc. There was one downfall that seems hard to escape when boondocking and that was phone service. I know some boondockers will not stop if they don’t have service, but it isn’t all that bad being disconnected for a while. A short drive in either direction and we could be connected, so we agreed to stay there.

I need to back up one stop and talk about Tecopa Hot Springs Campground. I’m not sure why but I found this place a shining example of WHERE NOT TO GO!! I had called ahead, asking if we needed reservations and some general questions about the park. I guess I did not ask do you have potable water, do you have phone service, do you have any attractive features that make me want to be there. LOL I honestly think this was the saddest campground in all our travels. It was plain ugly, with the only positive there were power hook ups. There was a dump station but no potable water. Actually no potable water in the whole area!! Not one reviewer said anything of the sort, nor did the campground manager I spoke with, even when we arrived and discussed staying a week. It might be beneficial and great customer service to say “remember to fil with water, this area has none”. Although one might wonder why the other two RV parks in the area were able to have full service? Again though, they were not able to fill us at even a cost. Oh and the hot springs? Dark little “houses” with pools that were separated for men and women. So indoors by yourself with other women. And according to the cleanliness of the other facilities, I think not. No thanks! Can you tell I do not want to go back? LOL

Okay I have that off my chest so let’s go back to The Pads. There are a few theories out there on what this is. A park built for mining staff is the consistent and seemingly correct one. There are 58 concrete pads as I show below, with most of the service pipes intact, and in some cases other concrete pads that appear to have been sheds. Of course things are starting to overgrow, but it is actually a very clean area. Most of the other RV’s here when we were (varied form 4-6) used the pads as their parking place, but we used it as our patio. The pads were generally 10x50’ and in great condition. There was an area with three sewage lagoons as well. At one time according to some “locals” there was also a community hall, tennis courts and pool. That is evidenced in the Google photo Don found at the end of these photos. It shows quite well the area and every rectangle you see is a pad!

I can’t determine who actually owns the land, some say the mining company still, others say it is BLM, and no one seems to mind the boondockers. And in all fairness, it is far nicer than a lot of campgrounds! 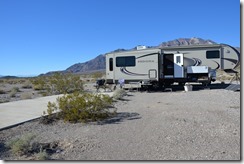 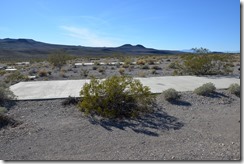 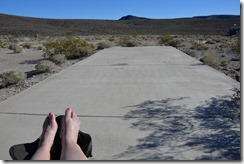 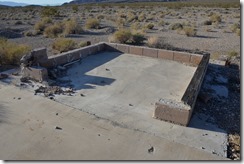 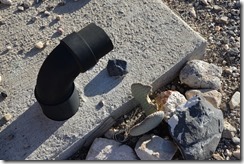 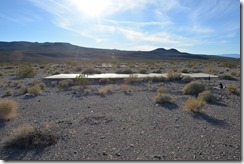 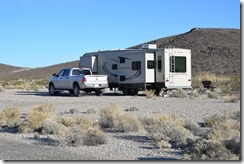 I will tell you about exploring the actual national park another day, maybe when we are actually done our tour of it.