Jeep Week is Over!

And that means it was time to move to Moab.  We really are creatures of habit, as once we find a spot to camp at we like, it is hard to change.  We stayed at Ken’s Lake which is a BLM site.  I won’t say there isn’t any boondocking near Moab, but none that fit our needs.  Some were too adventurous of a drive considering our habit of not being able to sit still, some were already packed full, and some were just not us.
Ken’s Lake is on the south side of Moab and only about 5 minutes from town.  A perfect location for exploring Arches National Park and surrounding areas, as well as evening wifi entertainment at McDonalds and a few stops at the Moab Brewery.
I guess I just summarized our stay here, but let me tell you about the hikes…
On a drive along the Colorado River one day we happened upon a road that said Fisher Towers, and a campground sign.  That was enough intrigue to lead us down the road.  While the campground was not for us, the road too bad and the sites too small, the trail called us.   It was absolutely phenomenal!  There is nothing like seeing these rocks and towers, and although I’m sure there are thousands of hikers who have viewed them, nothing is visible form the roads.  Wandering through the gentle red rocks, trailing around tower formations, climbing up crevice ladders, and ending at the perfect picnic site is beyond words.
The mightiest tower, the Titan, is a midway point.  This is a popular spot for climbers, and we observed some hearty souls that reached the summit and posed for photos.  On our way back to the trailhead Don spotted a couple whom he had taken some photos of.  He called out to them to show the photos and between their broken English and our total lack of German, we exchanged emails, and later sent the photos to them.  They were so grateful and excited, as they explained never did they expect to have a couples photo taken while climbing!
Although marked as moderate, this trail was pretty challenging for us, especially me.  Don may admit he is not the most comfortable with heights, but I am not the most comfortable with heights, climbing, walking on ledges and edges and sweating!  LOL  So it feels especially good to challenge ourselves and finish the hike. 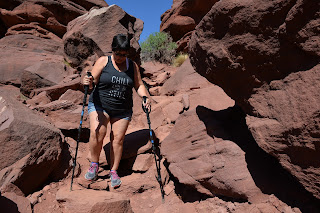 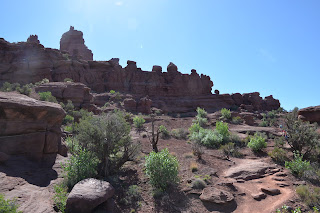 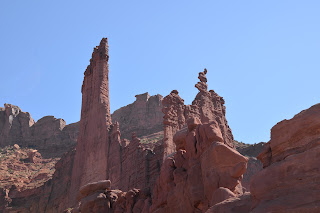 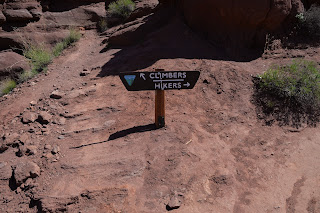 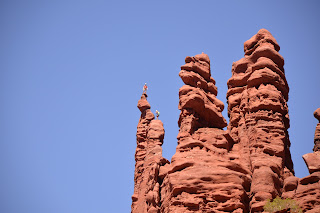 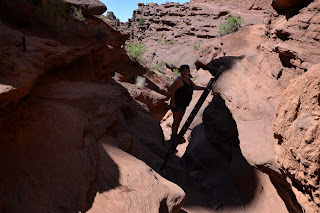 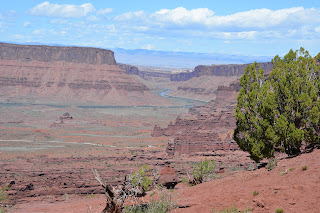 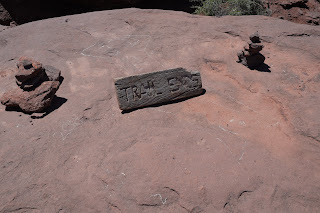 Our last hike of this holiday was the Negro Bill Trail northeast of Moab.  This is a popular trail in the heat, as it winds along a creek bed and has fabulous tree coverage for shade.  It is rated moderate but is an easy moderate.  The gift at the end is the Moring Glory Natural Bridge.   The bridge has a 75 foot span, and provides a cool covered area to rest, or have lunch.  Natural bridges are so awe inspiring and this one a bit ore than orhers.  Hopefully the photos help you “get” that! 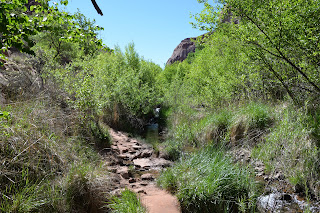 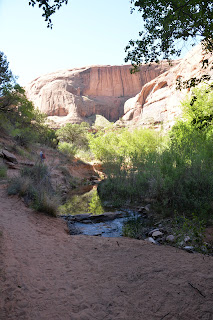 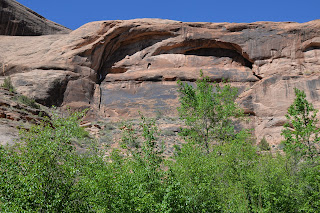 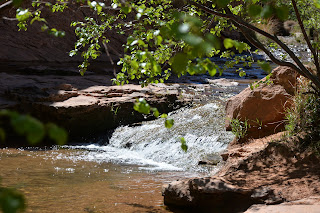 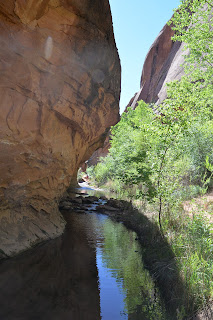 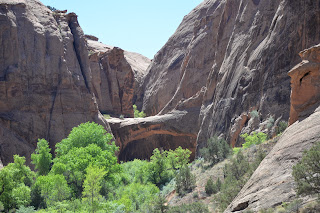 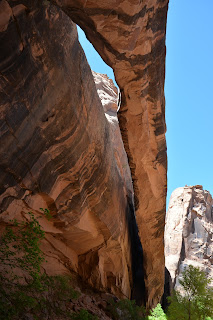 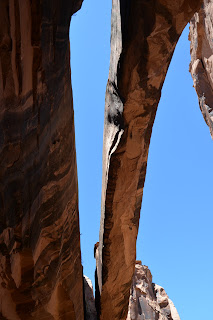 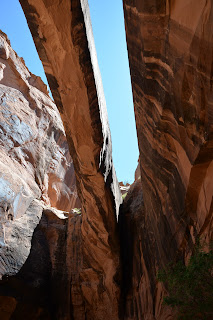 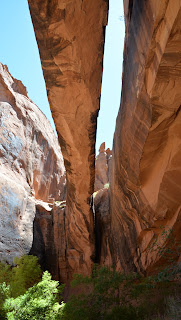 The rest of our time in Moab was spent driving exploring and laundry.  Yup that still needs to be done.
We are moving north to Salt Lake City today, and I will try to catch up before we leave for home.
Posted by Don and Donna at 9:59 AM