Our Most Northern Stop

So Yellowknife?  Home to the Canadian Shield, an old community surrounded by new and diverse things. From a bustling centre to rather desolate areas, in 0 to 10 seconds.  Surrounded by more rocks and water bodies than I've seen, but reminiscent of Newfoundland as well. There is no doubt this is a dynamic and unusual place.

And this campground finally had water. Now don't think we ran out because we didn't. Besides being great at dry camping our trailer has huge tanks. But I will admit we were at the end of our supply when we arrived. And the fill hose was slow, and I mean really slow. Oh well!

So set up, and ready to explore. Off we went in search of?  LOL. You guessed it, Boston Pizza!  When in Rome...  And then off for a few groceries. I can honestly say in all our travels this is the first place where the food prices made my eyes a bit googly. Especially items like milk and frsh produce. Oh and as I discovered the next day - alcohol!

Wednesday we started out relaxing and resting. We really don't slow down much in these holidays and it is always nice to stay somewhere 3 nights and get In a full 2 days of touring. I made an appointment for a tour of Buffalo Airways, the same place Ice Pilots is filmed. What a FANTASTIC idea!!  I must commend this company for the open arms stance they take with visitors. Tours are booked at lunch time as to not get in the way of the action, mechanics and planes, etc.  This tour was free, and upon completion it compares with any paid tour we've ever been on. They are welcoming of all questions and inquisitive minds, and let you walk around and through anywhere you wish.

When we first were taken on the apron, and saw the DC3, the tour guide noticed the door closed and said she would try to get us in before we were done. Right at that time a gentleman came over and said hey take them in, let's get the door opened. And that was Joe McBryan, the owner. He first offered himself up for photos, then made sure the DC3 was accessible, and invited everyone in and made sure we knew the best angles for photos in the pilot seat, etc. his son Mikey once described him as a combination of Howard Hughes and Al Bundy, and I would have to say that might be accurate. What a non assuming personable guy!

So the tour continued to wow us as we saw more DC3's, a C46, CL215 water bomber, and several bird dogs, and parts and parephanalia. We spent a lot of time in the hangar, which incidentally once was owned by Ward Air and stands on 6 feet of cement, to counteract any permafrost issues that might arise.

Don was studying a rotary motor (R2800 twin wasp radial engine) he believed was nicknamed the corncob, which the tour guide wasn't able to confirm, when a mechanic on his way back from lunch stopped to talk. It was Chuck!

Again I cannot say enough about Buffalo Airways, simply because of their open door approach and friendliness!  We picked up a few souvenirs,my-shirts and a stunning coffee table book about the business and staff.
The DC3 in our pictures was actually at Normandy on D Day and flew paratroopers behind enemy lines. This year, on the 70th Anniversary, Joe told us he flew 12 Canadian and 12 American Special Forces for a commemorative jump. The circular decal shows the date, squadron etc 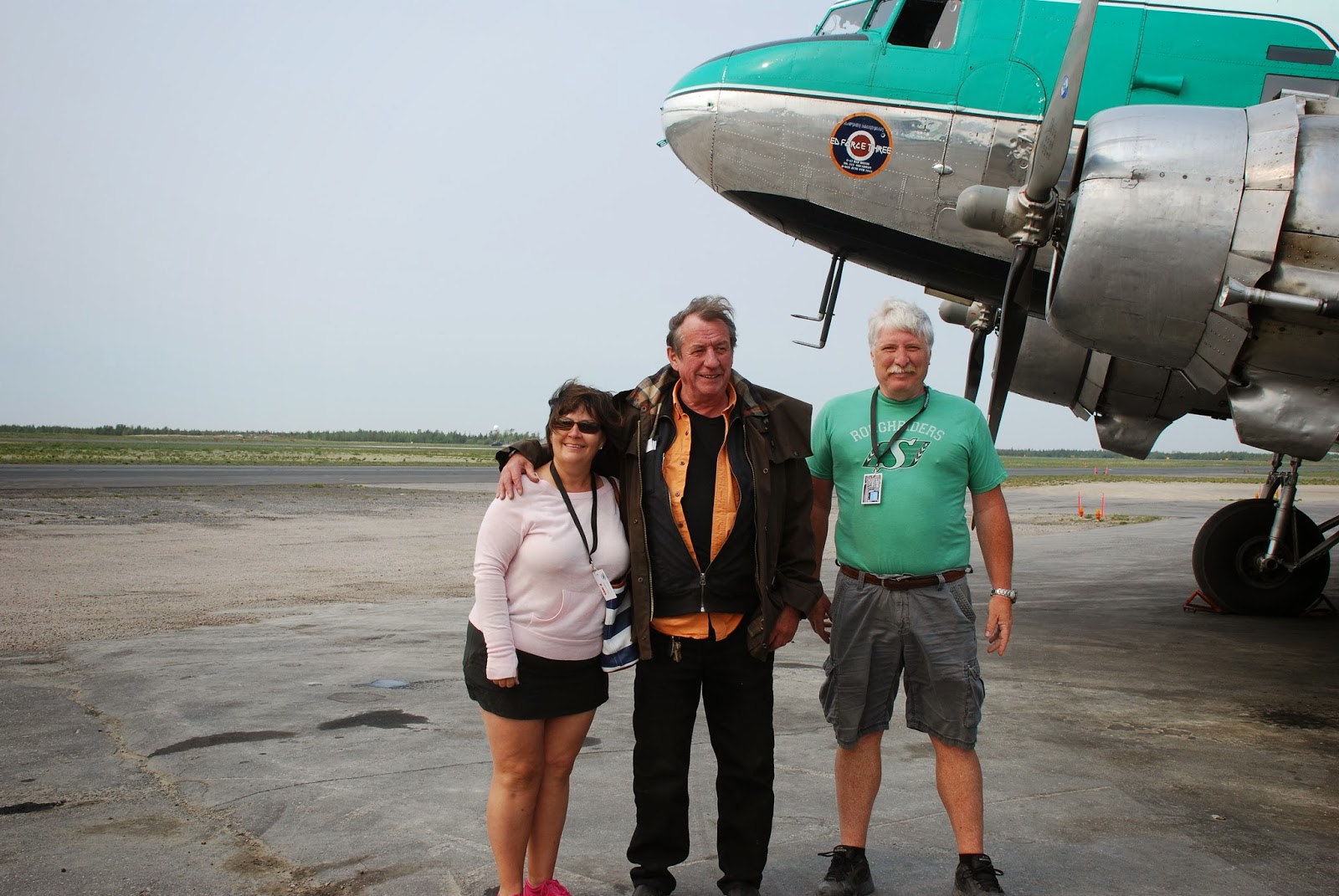 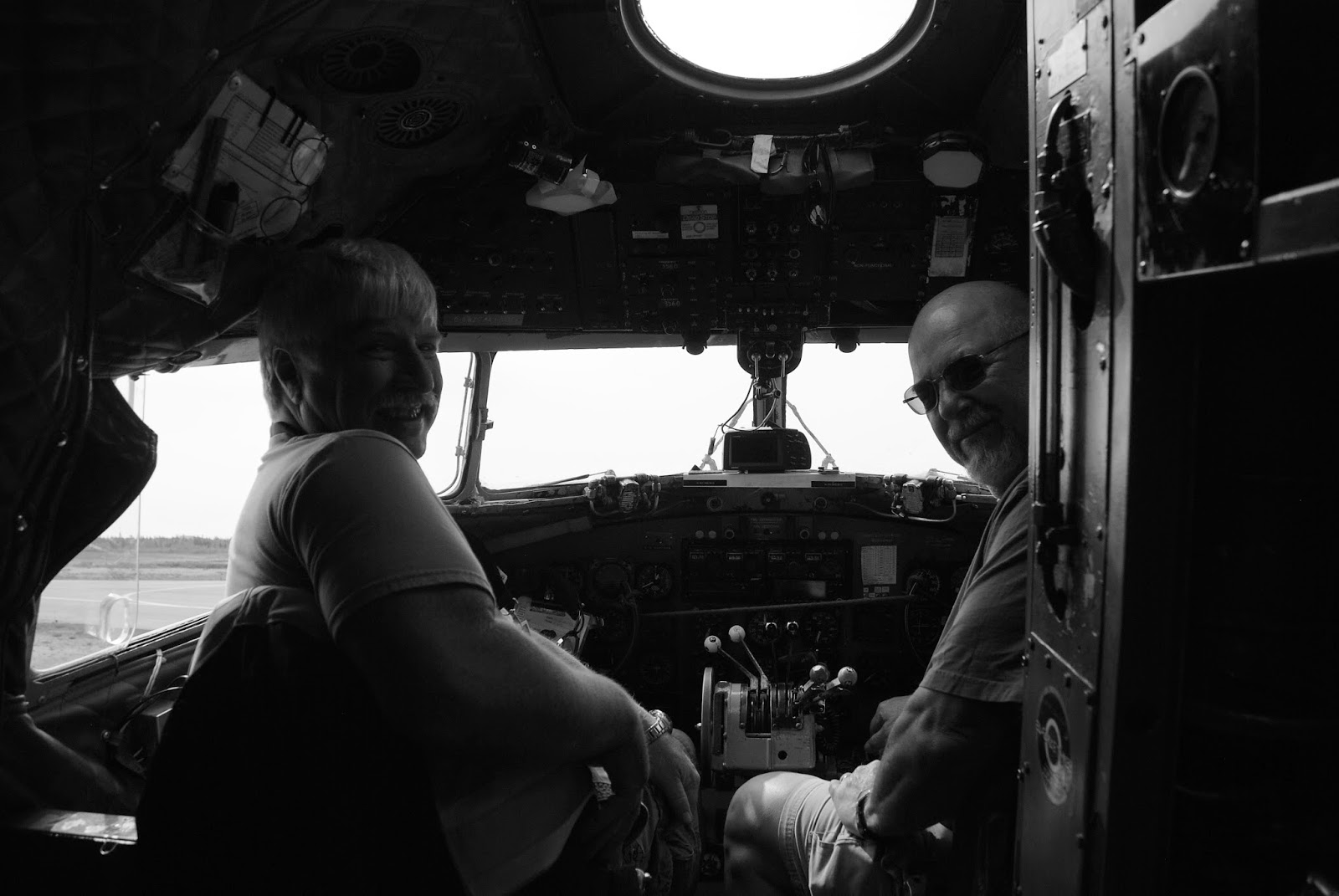 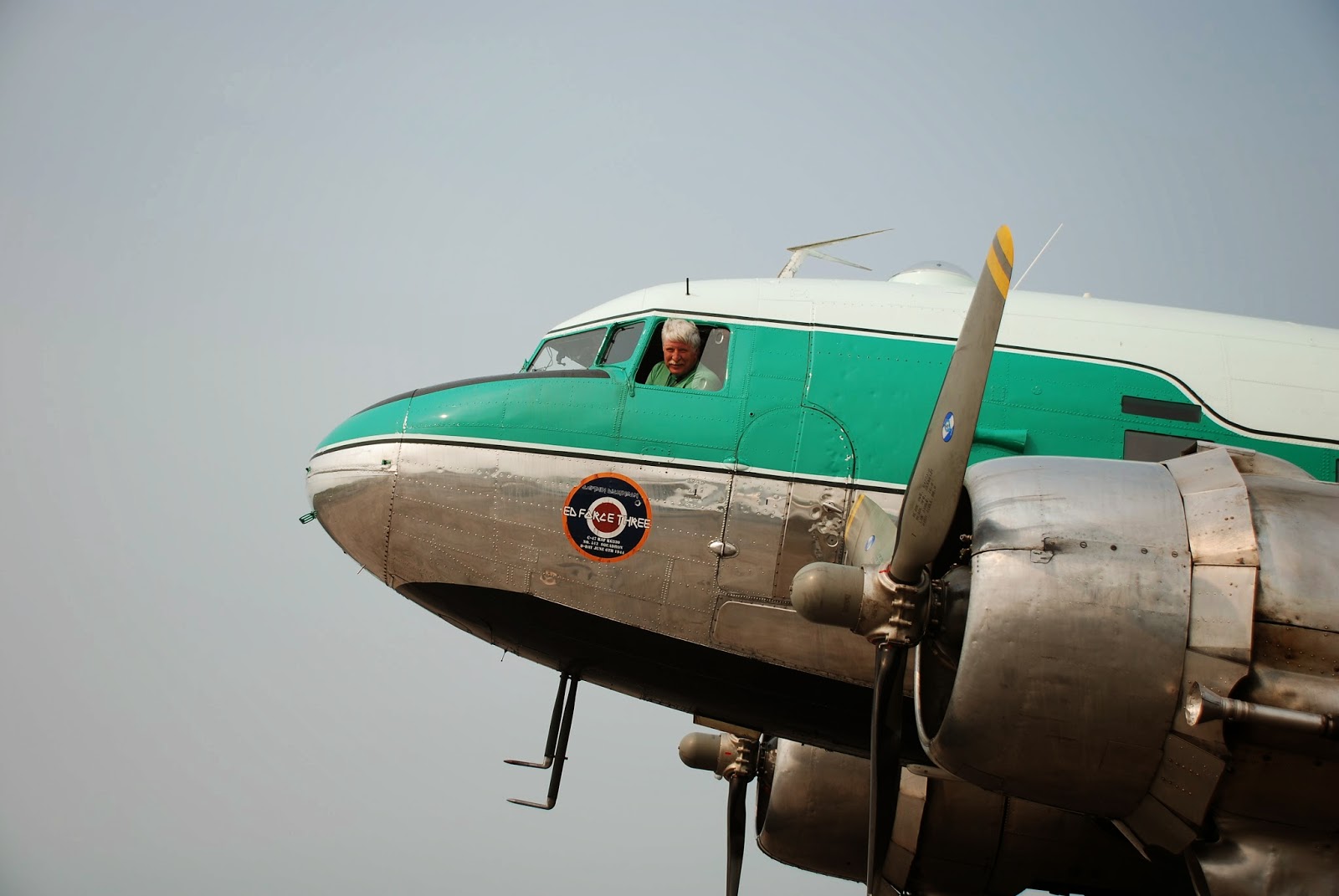 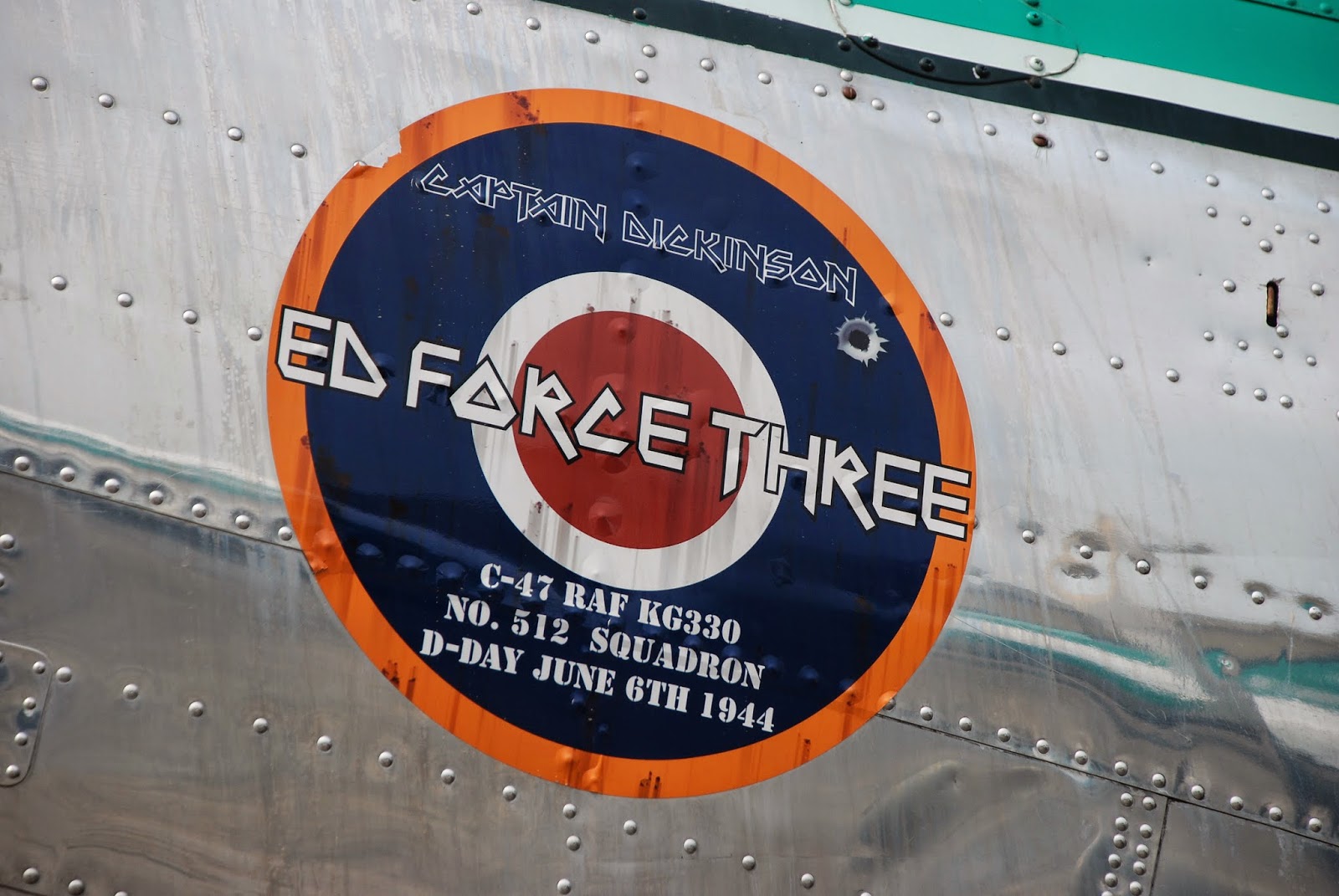 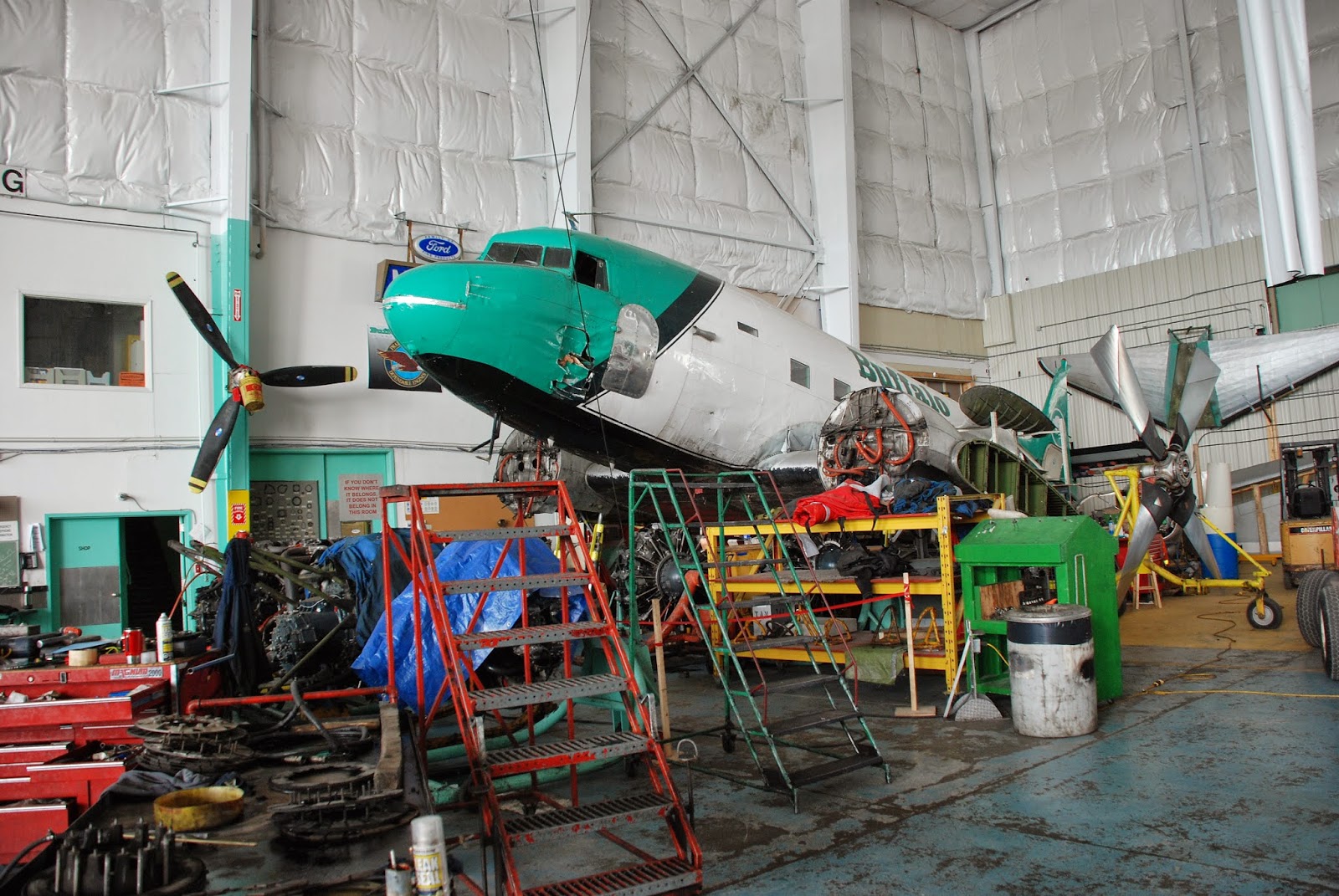 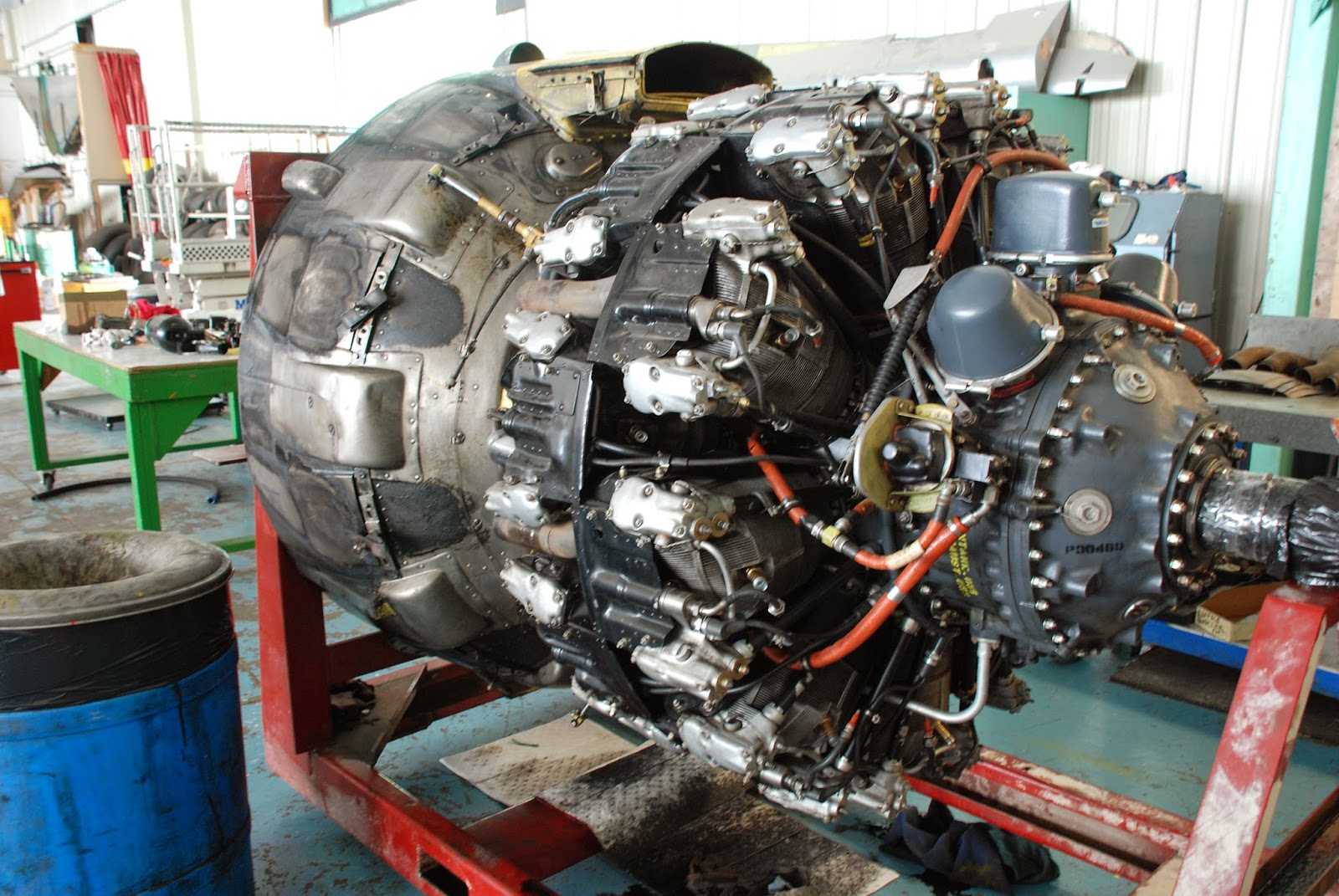 Today I found a nice "little" walk that led to Cameron Falls. There were some obstacles on the way though. The Ingram Trail, highway 4, is under construction almost every time you turn a corner or go up and down. And roads here appear to be mostly blasted rock underlays, so it was unique.

Second obstacle was I thought it was a gentle 1km walk, however I was out to lunch. It was about a 6km up and down climb, sometimes over bedrock, sometimes up man made stairs, and other times through bush. The reward?  The most breathtaking falls of the trip!  I think Don, Paul and Mary forgave me eventually. I will let the rest of these photos finish the story. 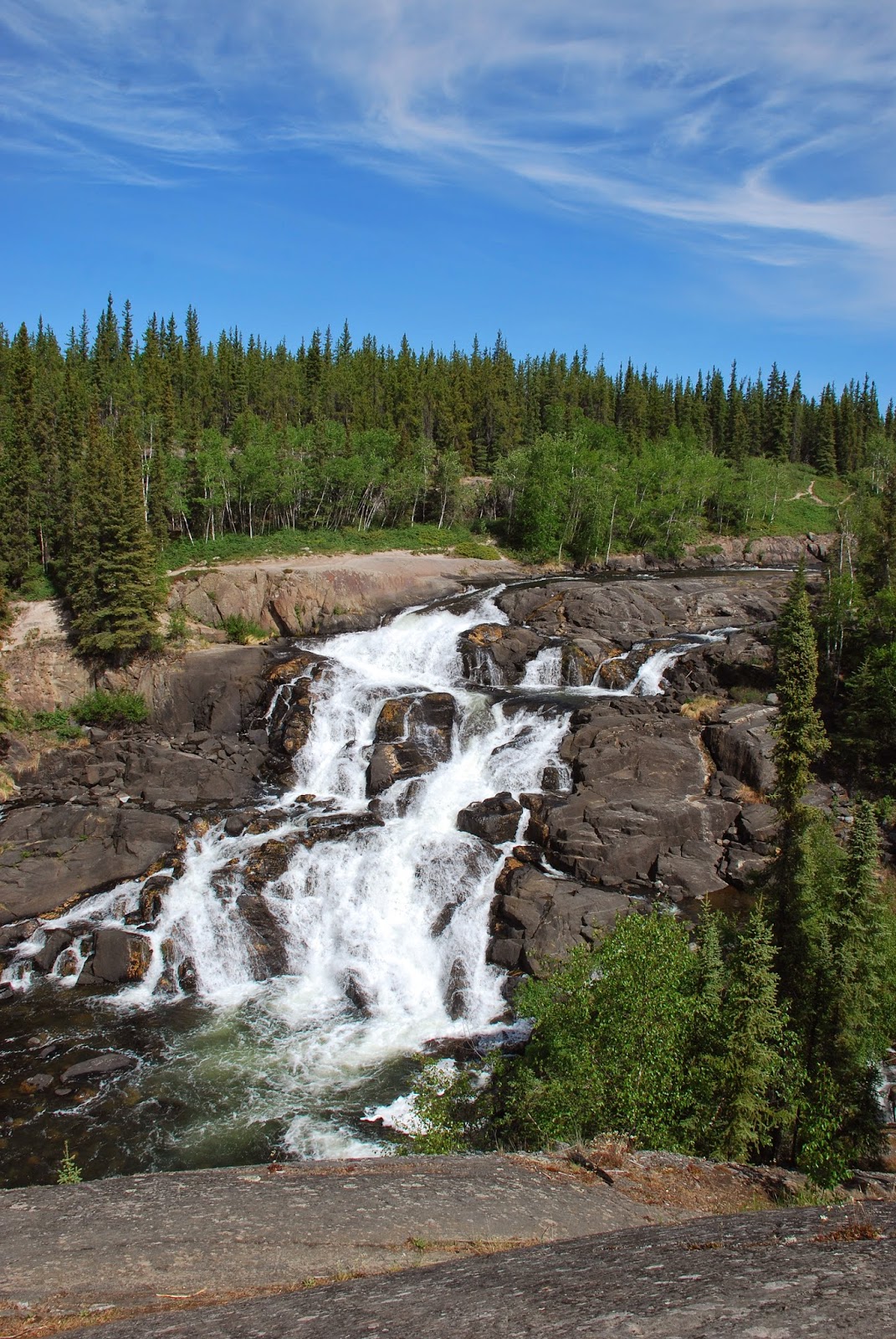 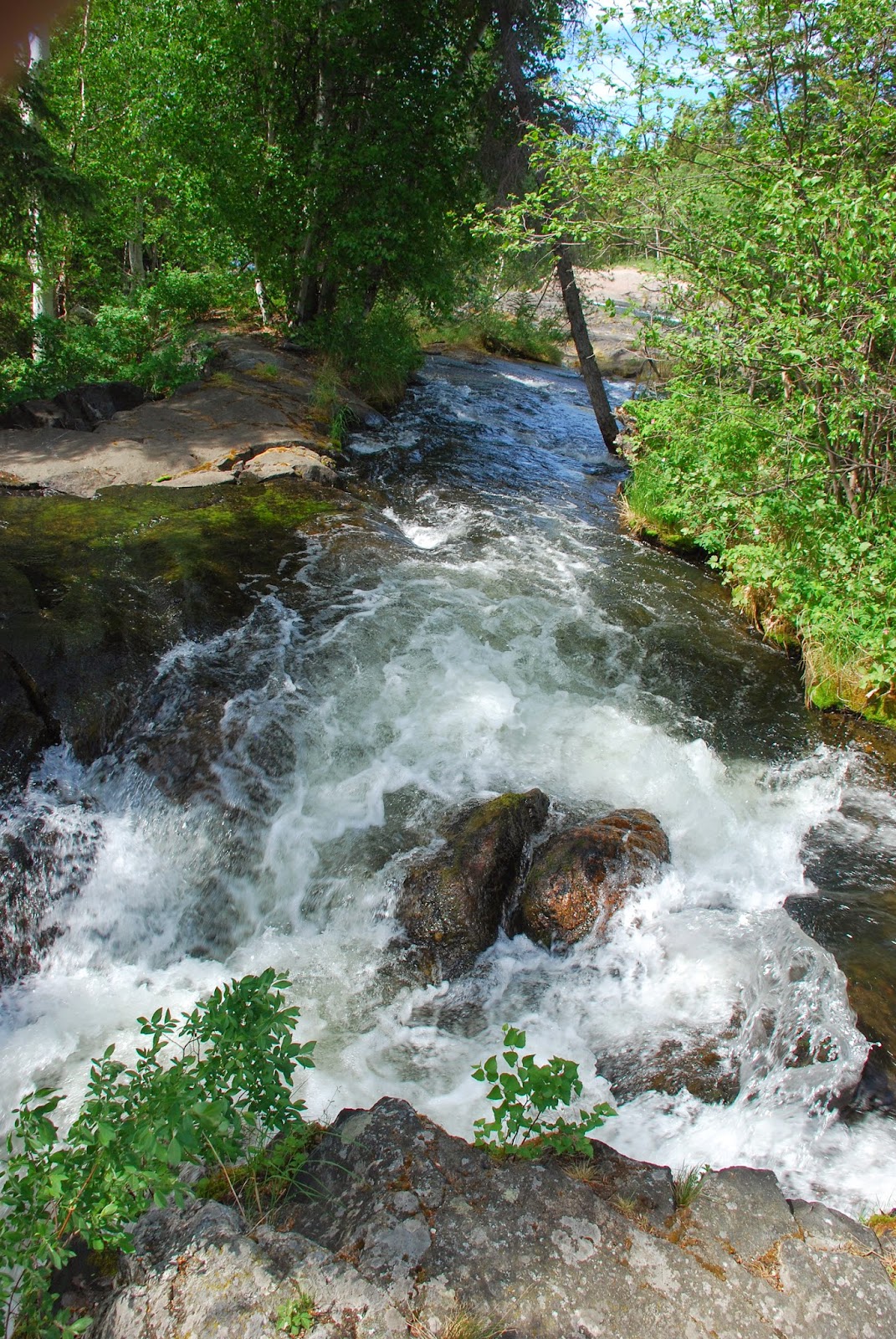 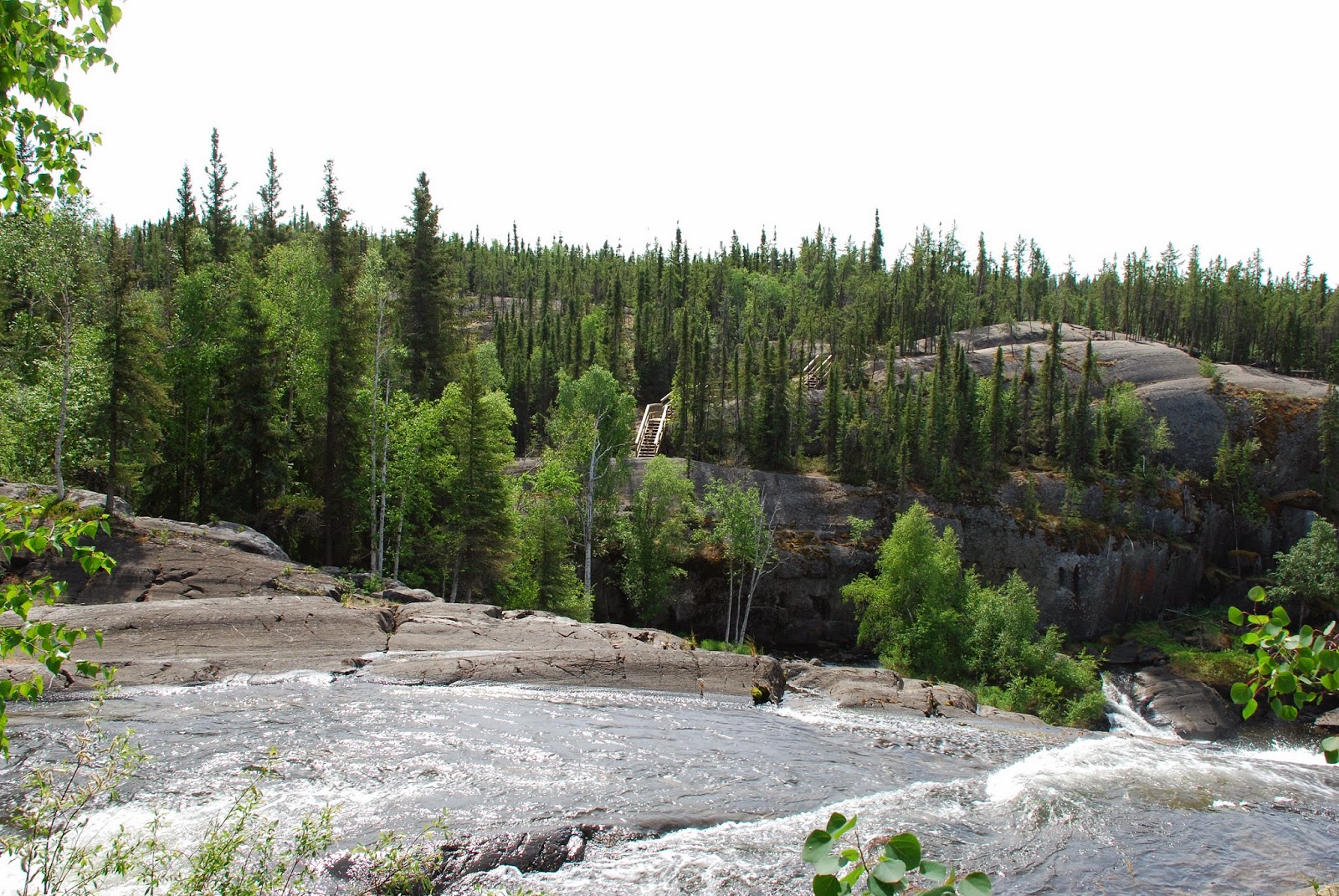 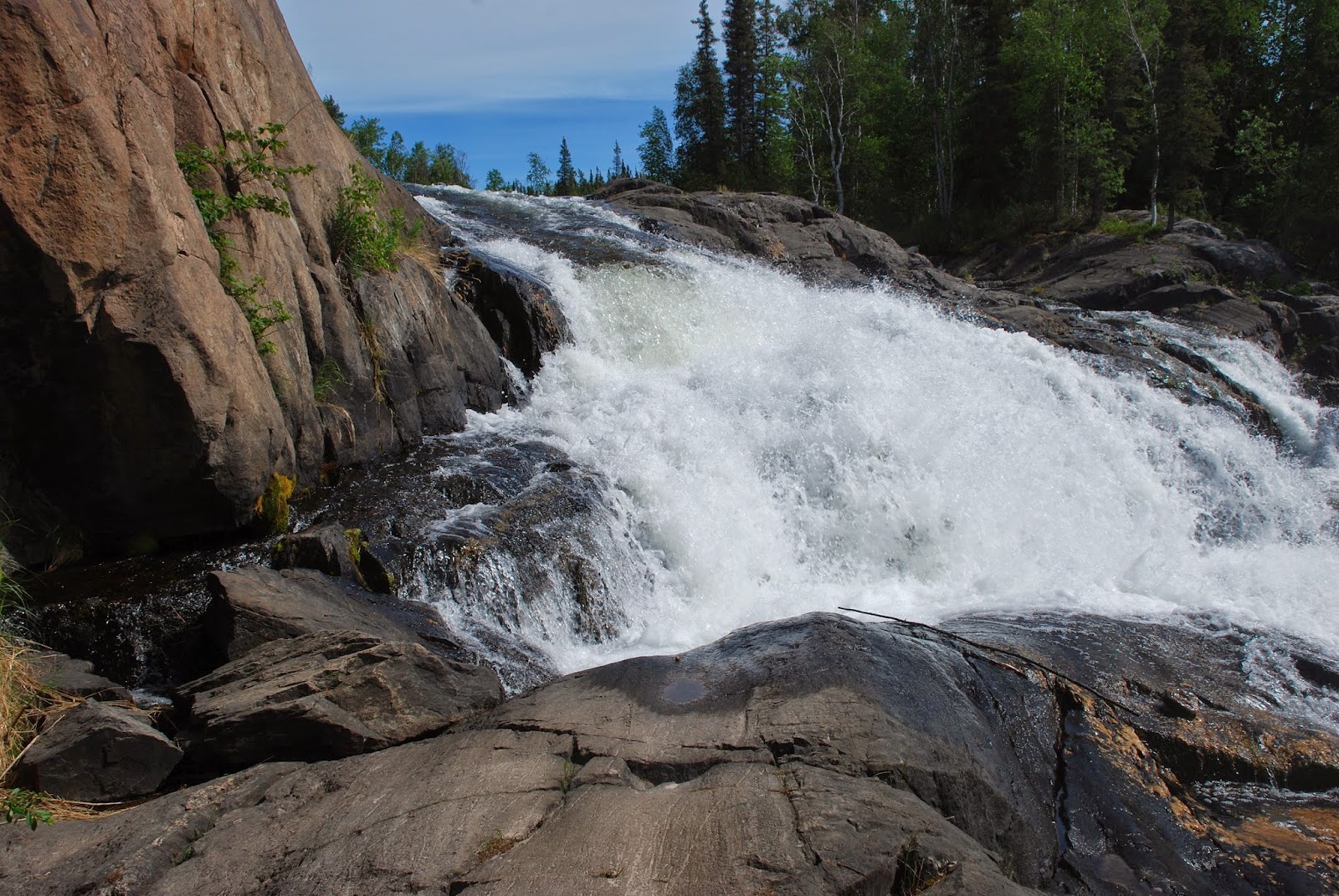 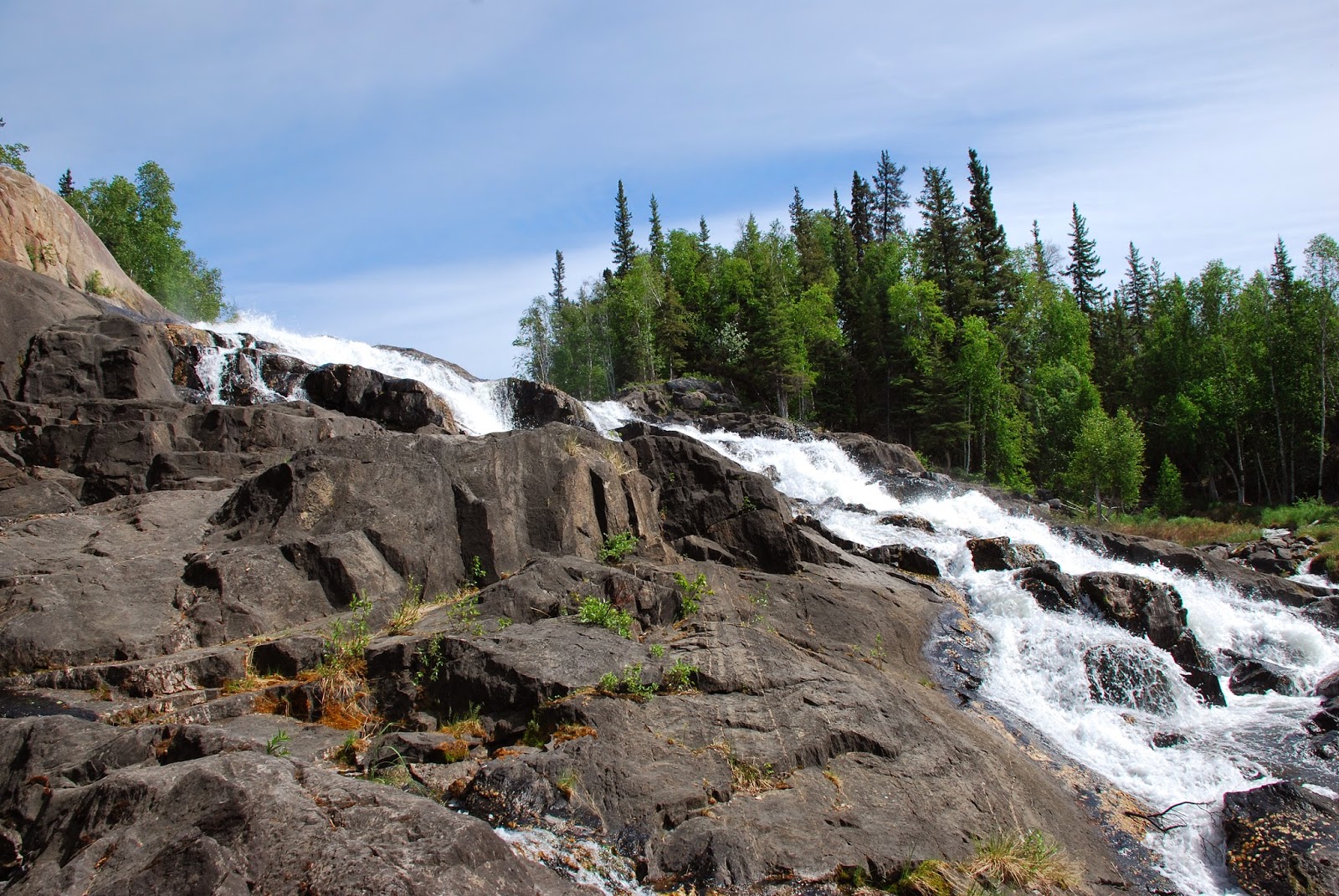 Tomorrow we off to Hay River, as a place to rest the trailer.  Our real destination on Saturday is Wood Buffalo National Park!  Talk to you after that trip...